Living with a global pandemic means we’ve all had to rethink how we go about our lives.

For a group of creative individuals living at IRT Peakhurst and in the wider community it meant their art classes had to stop for several months.

In August classes started again, with some COVID-safe changes, but lockdown didn’t stop the creativity as The Good Life found out . . .

“I was amazed with how it came out,” she says.

Christine is talking about a painting she created during lockdown. “It’s a copy of a painting,” she explains. “It’s acrylic paint on canvas.”

Christine is a resident at IRT Peakhurst and about 12 months ago she spoke to South-East Sydney Business Manager – IRT Home Care Phillipa Payne about strategies for managing her anxiety and depression.

“Phillipa suggested I try the art class,” Christine says. “The result is I can paint. Sometimes we work with clay, and our teacher Cindi (Abou Haidar) has lots of great ideas, but I do prefer painting. It certainly helps me and Cindi is a great teacher. We have lots of laughs and the social aspect is why I really enjoy it.”

The art classes have been running for more than two years at IRT Peakhurst and originally started out for home care customers living in the village. But now all budding artists are welcome.

During lockdown Christine had some private painting lessons. “That was really helpful too and I learnt how to mix paints,” she says.

Christine says by taking part in the art class she’s learnt different styles of painting and has done still life paintings of an apple and a pear.

To anyone thinking of getting into art, Christine encourages them to give it a try. “I didn’t know I could paint,” she says. “It’s fantastic therapy.”

IRT Peakhurst resident and home care customer Maureen Falconer has been enjoying the art classes for more than two years now. “I never liked art as a young person but the classes give you a different outlook on life,” Maureen explains.

While Maureen has missed the group classes during lockdown, she’s been experimenting with a new painting technique which she describes as “blobbing the brush”.

“It’s amazing how it turns out,” she says.

Maureen used this technique to paint a picture of flowers (above) in a vase using acrylic paints.

“I also watched an online art tutorial when the classes weren’t on,” Maureen says.

Of the restrictions on our daily life Maureen says you just have to go with the flow. “But the members of the art group missed each other’s company,” she says.

In her home Maureen has 12 of her own paintings on the walls. “My daughter has about four too,” she says.

Maureen says she was fortunate to be able to access private art lessons during lockdown through her Home Care Package.

Phillipa from the Home Care team says it is wonderful that class members had one-on-one lessons during the lockdown.

“We had to adapt quickly, so the one-on-one lessons were introduced,” she says. “The art classes have resumed but those who live outside the village are not attending, so they are still having private lessons. But we look forward to having everyone together again sometime in the future.”

Of the Peakhurst art class Phillipa says there’s a little touch of magic in the classes and it adds something to people’s lives. “It’s a space for everybody,” she says. “It’s special.”

What is ageism and how can we stop it?

Ageism exists in Australia and even though we may not always be aware of it, most Australians know it happens. 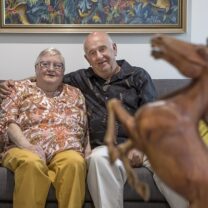 Diamond anniversary for the Valentines

Judy and David Valentine, at IRT Woodlands, share their name with Valentine's Day and this year celebrated their 60th wedding anniversary.