Despite being wheelchair-bound as the result of a stroke nine years ago, Eve has taken on the role of ‘postie’ at IRT Macarthur Aged Care Centre.

Sporting her winning smile and trademark flower in her hair, she sorts the mail and then delivers it to residents in her wing.

“It’s great. I go down every afternoon for an hour. We have a laugh and a chat – that’s what it’s about,” she explains.

“I love Eve’s spirit,” says Jenny Hart, who works on the reception desk where Eve sorts the mail.

“Eve livens up the whole place when she’s here. She’s just so chirpy and I love having her around. We’ve become really close.”

Eve’s spirit has helped her get through some tough times, including a violent marriage then raising three children on her own. Her life changed forever when she lost one of her sons in an accident.

“Life wasn’t easy but I am lucky because I got through all that. Someone’s riding on my shoulder,” she says.

Living in government housing, the family moved a lot, which meant having to form new networks and friendships. Volunteering became a way to do that.

“I love to be active, I love helping people. It makes me feel good. I listen to other people’s stories and I think ‘oh, I thought I was badly done by!’. “

The art of listening is a lesson Eve learnt from her Dad when she was young and she’s never forgotten it.

“I was talk, talk, talking to my brother one day and my Dad called me over and said ‘you talk too much. You won’t hear anything if you keep talking all the time. But when you listen to other people you learn a lot’.

“He was smart and he taught me a lot.”

Eve has volunteered for the Salvation Army, the Royal Prince Alfred Hospital Auxiliary and a stroke recovery support group. The latter she joined in her 80s but long before she had her own stroke, which paralysed the right side of her body. Eve spent three and a half months in hospital undergoing stroke rehabilitation, to get movement back in the right side of her face. She admits it was a dark time in her life.

“You’ve got to get through the bad to get to the good. I used to tell my children that when things go bad have your grief, get over it and get on with it. So that’s what I had to do.”

She moved into IRT Macarthur a short time after getting out of hospital and things started to look up.

Earlier this year she was chatting to employees at the reception desk about her years of voluntary work.

“I said yes straight away and that’s how it started. It’s good because it gives me a chance to talk to people,” she says.

Now she’s waiting on a new motorised wheelchair, and she has plans to expand her postie duties.

“My left leg’s been pushing this chair around for nearly nine years and it’s getting tired. When I get a powered wheelchair I’ll be able to do more deliveries.” 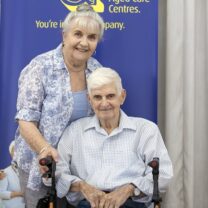 IRT The Ridge residents share their thoughts on intergenerational relationships.