Keeping it all in the family

"Who would have thought that 50 years later, we would be living in the same IRT Parklands retirement resort in Queensland, Australia.”
Di Carson
IRT Parklands resident

There was plenty for the Hill family to celebrate in 1969, with all three children getting married that year.

Two of the couples – Graham and Eleanore and Geoff and Di – now live at IRT Parklands and are celebrating their golden wedding anniversaries this year. “Who would have thought that 50 years later, we would be living in the same IRT Parklands retirement resort in Queensland, Australia,” Di says.

(Today Olwyn lives in Snells Beach, Auckland – she and Vic divorced many years ago.)

Geoff and Di met through a mutual friend in May 1969 in Dunedin while Geoff was studying at university and Di was working.

Music was a big part of their lives – with Geoff playing guitar in a band. However, their priorities changed and Geoff sold his guitar and gear so he could buy an engagement ring.

The couple got married and it wasn’t long until their firstborn son arrived. He was followed by two more sons and a daughter – the first girl for four generations in the Carson family.

Geoff studied commerce at university and majored in accounting, and his work took the family to Wellington. A few decades and a couple of different roles later Geoff was headhunted by an Australian company and they made the move to Brisbane in 1996 – leaving four adult children behind. But their two youngest children followed soon after.

In 2010 Geoff and Di moved into IRT Parklands.

So, what’s the secret to their long marriage? “Having a sense of humour,” Di says. “Music – Geoff often strums the guitar and we like going to concerts too.”

Sport has been a big part of their lives – in particular squash and tennis. Geoff is a self-confessed golf tragic and they both play table tennis. To celebrate their golden wedding anniversary they are travelling to Europe for a Baltic cruise, followed by a transatlantic cruise.

Eleanore’s sister Dianne set the couple up on a blind date – Graham was a champion cyclist and Eleanore a champion ballroom dancer.

Things were progressing well but it took Eleanore’s six-year-old daughter Patsy to really get things moving on their third outing by asking Graham, ‘Why don’t you marry my mum, because I love you?’.

When asked about the year 1969 they said it was all about weddings – three in Graham’s family and two in Eleanore’s and of course the birth of their son Russell on 5 October.

On the work front Graham was a representative for an electrical engineering company but the pair was keen to get ahead and started working together in an insurance agency.

But Eleanore found herself battling health problems, which were exacerbated by pollen in the air where they lived in New Zealand.

So, when Russell and his wife Janice moved to Caloundra in 2001, Graham and Eleanore weren’t far behind – moving to Brisbane two years later. By this time, Patsy was married and living in Canada.

After the move to Australia Eleanore’s health improved considerably but Graham has had his own health challenges – a battle with neck cancer in 2013 and again in 2018, but he is recovering well.

Once in Brisbane they invested in Eleanore’s brother’s yacht building business, so Graham learnt a new trade and Eleanore did the books. Sadly, the business was lost to a fire in 2007 and they had to start all over again. They moved into the real estate business and retired four years later, aged 70.

When asked about the secret to their long marriage Eleanore says they’ve been able to pick themselves up and get on, without too many regrets. “Having a good sense of the ridiculous helps.”

Graham says it’s important not to sweat the small stuff. “Accept your problems, but don’t surrender to them.”

The couple celebrated their 50th anniversary over dinner with family and friends on 18 January. 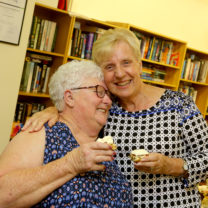 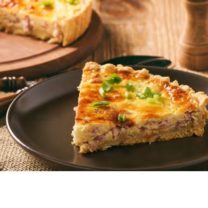 IRT Catering's Ben Mitrevski serves up a dish that was popular 50 years ago and is still a firm favourite today.