The NSW South Coast bushfires in late 2019/early 2020 were catastrophic – with loss of life and property. Here, two of our home care customers share their stories of survival.

Home care customer Susan Row left her home at 3.15am on 31 December 2019, not knowing it was the last time she’d walk out of her home of more than three decades.

“I lived on 40 acres at Wandella, north of Bega, near Cobargo,” Susan says. “I lived in the same house for 35 years. It was my first experience of a bushfire.”

Susan says there were lots of bushfires around but they were a long way off – some 40km away. She went to bed at 10.30pm but was woken at 3.15am by a call from a neighbour. “She said we had to go,” Susan explains.

So Susan grabbed her knitting bag and packed her medication, wallet, phone, pyjamas and some clothes, grabbed her dog Ellie and some dog food, and was picked up by her neighbour. “I thought I was coming back to the house, but that was the end of that.”

The pair arrived at the coastal town of Bermagui a short time later, to stay at Susan’s neighbour’s sister-in-law’s place, but from there they were evacuated to the beach.

“It was horrible sitting on the beach in the middle of the day and it was so dark,” Susan says. “But the SES were wonderful and looked after everyone.”

They were on the beach for about six hours with thousands of other people.

Susan explains that fortunately the wind changed direction and they were safe, but they had lost phone connection and power. “The SES contacted my family to let them know I was okay. Also, during the fire a member of the Home Care team, Lauren Lowder, who provided care for me, tried several times to get me and notified the Fire Chief of her concerns for me.”

Susan’s son then drove from Canberra to collect her, and she’s been living in Canberra ever since. “I stayed with my daughter before I was able to move into the place I am living in now.”

Sadly, Susan lost everything in the bushfire and describes the fire as like a great big wild tornado. “The glass windows in my house melted from the heat. Everything was vaporised. All that was left of our machinery shed was one end, the caravan went, as did the garden shed, carport and the house.”

Of her three cats, two turned up at her old neighbours’ place and are now living there.

Susan returned to her home for the first time in June. “It was sad to see the skeleton trees in the mountains. I had a picnic on the brick wall of my house and said goodbye.” She also collected some Wedgewood plates that were salvaged from her home. “Two plates survived – one of which was the very first plate my husband had given me on our first Christmas together. It was a Christmas plate. It’s amazing it survived.”

She’s now settled in Canberra, and her family is glad to have her close by. Susan was receiving IRT home care services in Wandella and is now being supported by the ACT Home Care team.

“IRT was really great when I had to move and looked after me straightaway,” Susan says.

Moruya Heads resident and home care customer Mary Bolton was worried and unsure what to do on New Year’s Day. She had no power and could see smoke coming from Mogo in the north.

“I was more frightened of the bushfires than of coronavirus,” she says. “Then Pamela Barry from the Home Care team came and got me. She told me to pack a few things and she took me to IRT Moruya and I stayed there. It was such a relief when she came and got me. They looked after us so well.”

Customer Relationship Manager IRT Home Care – South Coast Pamela Barry says that Mary’s family was in Tasmania on holidays at the time. “I checked up on our vulnerable clients, including Mary,” Pamela explains. “I was unable to reach her by phone and had confirmed that the power would be off indefinitely. Mary and I discussed being at home with no power and her family being away and she decided it was best if she went to IRT Moruya. I contacted Leanne Turner at IRT Moruya Aged Care Centre and asked if she could take community clients and she said she would make room for anyone in need.”

Mary says that even though IRT staff had their own homes in jeopardy they came to IRT Moruya and looked after everyone. “I felt very safe there. At home there was no power and my mobile phone had no charge. But I was lucky, my house was still standing. A neighbour kept an eye on my place.”

Mary was able to return home after five days but was evacuated to IRT Moruya two weeks later when fire threatened again. When talking about the bushfires Mary says she has never experienced anything like it before in her life.

During the bushfire crisis four home care customers were taken to IRT Moruya Aged Care Centre and cared for.

Mary had a stroke 15 years ago, and after six months respite care with IRT she became a home care customer. 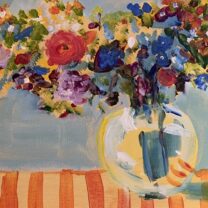 Remaining creative has been important to a group of individuals living at IRT Peakhurst and in the wider community.