Wayne’s on a roll

Music and performing is in Wayne Thomas’s blood. He had his first performance at age ten and is still entertaining audiences more than six decades later.

“As a ten-year-old I sang Elvis Presley songs in my father’s band,” he says. “I got ten shillings for doing that. I remember getting Brylcreem in my hair.”

The IRT Thomas Holt Stafford Court resident explains he came from a family of musicians and has been playing the drums for 50 years.

In the mid-60s Wayne became a session drummer for the Bee Gees after meeting with Lesley Gibb – the Bee Gees’ sister. “They needed a drummer for a recording session and Lesley suggested me and I was with the Bee Gees for nine months,” he says.

Wayne was a drummer for four different record labels and many other artists including singers Tony Barber, Vince Melouney and Ronnie Burns.

His first shot at the big time was at the age of 19. He was in a band called Plastic Tears but he left and formed Flake. “We won a 2UW band competition from 40 bands,” he says.

Flake’s debut album was called How’s your mother! and the band, which performed pop music, had success in the Australian music charts with a Bob Dylan cover This wheel’s on fire, a cover of Marmalade’s song Reflections of my life and a Vanda and Young song Life is getting better. The Vanda and Young song was among four they gave to Flake and two were on the album.

Wayne remembers playing in concert with Daddy Cool and Johnny O’Keefe. However, the grind of touring took its toll and after four years Wayne left the band in 1972.

He worked in record bars, wrote a pop column for pop newspaper Go-Set and The Sun newspaper, worked for Polygram as a sales representative and for Virgin’s video division. He also worked full-time as a club musician and had lots of experience playing and performing. But he confesses he cannot read music. “I’ve just got a good ear,” he says. As well as the drums, Wayne can also play the piano and rhythm guitar.

Wayne got to a point in his music career, in 2010, when he was trying to work out what could be done that hadn’t been done before. “Then I thought about the girl groups from the sixties and The Starliners were born,” he says. The Starliners is led by three female vocalists who pay tribute to the great female singers from that era including The Supremes, Aretha Franklin, Dusty Springfield, Lesley Gore, Connie Francis, Petula Clark and more.

Prior to the pandemic the band was performing sell-out shows across the Sydney club circuit and other venues. Like all entertainers, 2020 was a tough year for the band. “But we are starting to come back from COVID,” Wayne said in November. Wayne is the band’s MC, which now has 13 members, and says his performance can be corny at times. “But people love it,” he says. “We are a very entertaining show band and I’ve never been in a band this long before – it’s been more than ten years now – and no band members have left. I’m in my 70s now and my son and daughter are in the band – my son is a good drummer and my daughter Rachel is one of the singers as well.”

His love of music is also reflected in his home where he has over 1000 CDs. He also collects movies, with 2000 DVDs and has some 3000 model soldiers on display. “I give people guided tours of my home, ‘the mini museum of visual delights’, and my collections,” Wayne explains.

In 1995 Wayne joined Miranda Music Society and has done 25 shows at the Sutherland Entertainment Centre. He is the society’s advertising manager and has sung and performed in their productions.

His other passion is board games. He formed the Sydney Board Games Association in 1983 and he’s the association’s president. Wayne says his favourite board games are the word game Scattergories and Brisk Bizz, an empire building game. Wayne says he’s invented some 23 board games, which are played by club members. His newest game is called Danger Zone and it is about COVID. “You need to avoid picking up the virus card,” Wayne explains.

Wayne has no plans of slowing down anytime soon. “It’s amazing I’m still here after all these years of rock ‘n’ roll,” he says. “And still having fun!”

At present, there is no cure for arthritis, but one way you can try to manage arthritis-related conditions is through diet. 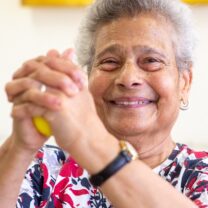 Getting back out there

2020 was a tough year - IRT resident Ve Rao talks about what got her through it.