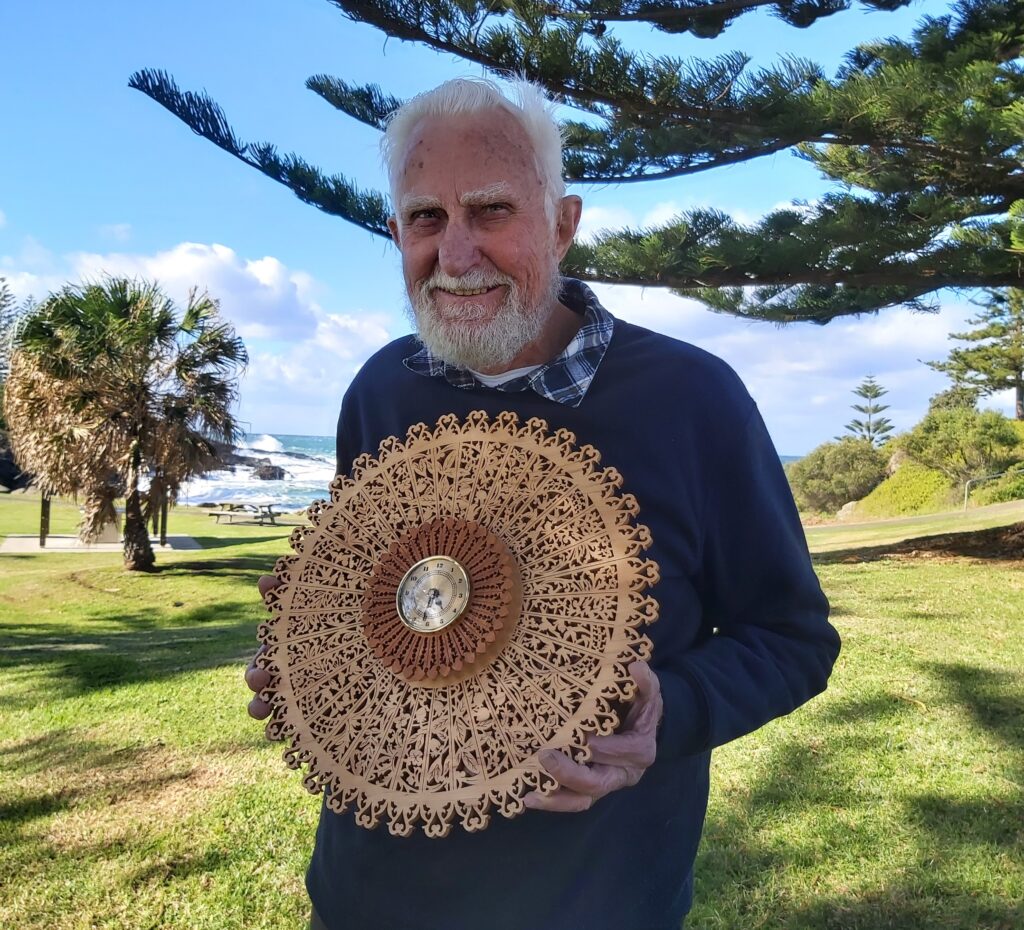 Fretwork is a decorative style of wood machining – done with a fretsaw – where the design is machined from a thin piece of timber. Fretwork has been Ted’s hobby for more than 20 years and he has won two national Australian Scroll Saw Network titles in addition to the three new prizes he took home on the weekend of the 15 and 16 of May. The competition was meant to be held in May 2020 but was postponed due to COVID-19.

Ted is one of the original members of the Australian Scroll Saw Network.

“The best part of the weekend was being awarded the life membership. To me that was the highlight. It took me completely by surprise that at 87 my work is still at a prize-winning level,” Ted said.

Ted never used to have a hobby, but after seeing a 12-year-old girl doing fretwork at a woodworking demonstration in Albury/Wodonga 20 years ago, he decided to buy a saw.

Ted describes his saw as like a sewing machine but with a blade instead of a needle. The timber is overlaid with a design, which he runs through the saw. After cutting the timber he punches it out. Then he assembles the pieces and finishes it off. He can also dye the timber to create different effects. The end result is extremely intricate and detailed.

“I used to be able to mill my own timber but today I work out of the small workshop here at IRT Harbourside,” Ted explains.

Ted spends about three hours a day in the workshop when he can – he enjoys being totally absorbed in his hobby. “It requires total concentration, everything is wiped from your mind.” Ted is also a member of the Kiama Woodcraft Group, the Kiama Men’s Shed and the Scroll Saw Network.

Ted’s religious fretwork pieces have ended up in churches – including Royal Prince Alfred Hospital’s chapel and several churches in Kiama.

“I’ve done a lot of religious pieces and I love to do them because they are so intricate but I’m not religious.”

Following the death of his wife Val in 2018, Ted got back into fretwork. They were married for 64 years.

He grew up in Mortdale, Sydney and before he retired to Kiama he designed and installed industrial air conditioning. “My grandparents had one of the first houses in Minnamurra and we used to visit there a lot,” Ted explains. “We always wanted to move down here.”

Before COVID-19 Ted had been travelling around to woodworking shows and events in his maroon motorhome but now, at 87 years of age, Ted has parked up the motorhome for good.

Ted enjoys the satisfaction of creating a piece and then being able to sit back and say “I did that”.